The Baby I Only Knew For An Hour

Last week I had the opportunity to visit Mother Theresa’s Hospital for the Sick and Dying Babies.  I picked up the first crying baby I saw. His teary eyes lit up, and a grin quickly spread across his face. As he nuzzled in close I feared he might break in half as his arm couldn’t have been more then half an inch round. His eyes were too big for his head, and his belly too big for his body. An almost two year old weighing in at 11 pounds. My heart.

It didn’t take very long before he fell asleep in my arms.  His tiny jaw fell open, and his boney limbs dangled at his sides. I loved him so much. 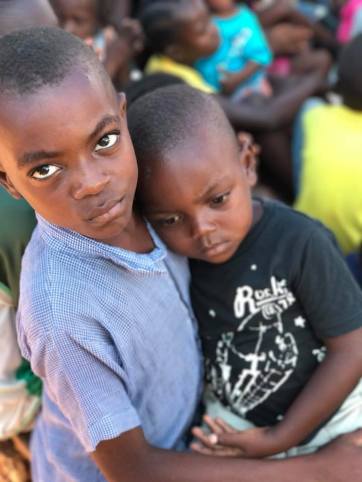 I laid him down, knowing that if he was asleep, I should try to pick up one of the other children.  As gently as I could I laid him down on his back in the crib. I removed my hand slowly from out behind the back of his head, when suddenly his eyes flashed open. The floodgates opened almost instantaneously, and his tiny hand reached for mine before I could pull it away. I picked him up again. What else could I do?

It wasn’t more than 30 seconds before he fell asleep again, the whole process repeated itself.  Oh sweet baby, If you’ll sleep better in someone’s arms I’ll keep holding you!

As I left that baby, the tears he cried pierced my heart because
I knew I’d likely never see him again.

“I love you,” I whispered in his ear, “you’re gonna do big things.”

I don’t know why I said that, but I believed it.

As much as the tears broke my heart, they brought a smile to my face because I knew what they meant. I knew if these babies were crying it meant someone had been taking care of them.  This little guy still knew his voice mattered. He knew that when he started crying someone would come to him.

Isn’t that what most of us really want? Someone to respond to us. I couldn’t help but spend the rest of the day reflecting on how much I feel like that little baby.  There are days I just feel so helpless. I find myself crying out for God because I can’t even lift my head on my own. Sometimes it feels like God isn’t hearing me.  I feel like I’m just laying there waiting for him to pick me up. Sometimes I feel tired and I just want him to hold me so that I can truly rest.

Sometimes it feels like I’m the baby he laid back down in the crib.  It feels like I’ve been crying for days and no one has come to pick me up.  Have you ever felt like that? Felt like no matter how loudly you cry, God is just not answering?

The more time I spent with this helpless babe, the more I began to see myself in him.  The longer I held him, the more thankful I became for a God that never lays me back down.  I don’t serve a God that says “Hey, that baby over there is crying so I’m going to have to lay you back down for a little bit!”  His arms never get tired, he never has other things to do, and he ALWAYS hears our cries.

At one point I tried to re-position the little guy’s head, because his neck looked horribly uncomfortable.  As I worked to re-position him, his eyes flung open yet again and the tears began to flow. However, the stark difference was that as soon as I pulled him in close again, he settled back down and fell back asleep.

How many times do I do this to God? I began thrashing and wailing at every re-positioning, fearing he’s going to set me down, fearing I won’t be as comfortable as I was before.  If I, a simple girl having just met this baby, was simply looking out for his best interest, how much more is the God of the universe that created me, looking out for my best interest?

I must believe that God loves me much more than I ever loved this child. I mean, I really feel like I loved this baby. As much as one can feel an emotion of love, I felt it. But let’s be honest, I’ve never had to stay up with this little one in the middle of the night.  I’ve never had to change his dirty diaper.  I’ll never have to live through his two year old tantrums, or his teenage drama filled years.  I only knew him for an hour, and love is much more than a simple emotion. I most certainly believe that God loves me much more than I felt I lovedthis child.

If this is true, then I must trust that even when I can’t feel his arms around me, it’s not because he’s pulling away, it’s not because he’s left me. I must trust his re-positioning of me, no matter how uncomfortable it feels.  I have to believe that my creator who sent his son to die on the cross for me is holding on to me tighter than I could have ever held that baby. I believe that despite what my emotions say, I have a trustworthy God that will ALWAYS respond to my cries.

Living With A Broken Heart

Living With A Broken Heart

ESPWA's Mission
to share the hope that is found in Jesus, and help to meet the physical & spiritual needs of the people of Haiti.
DONATE TODAY

Help ESPWA Ministries raise awareness of the conditions and needs of the people of Haiti, and to support their physical well-being and spiritual growth.

This error message is only visible to WordPress admins